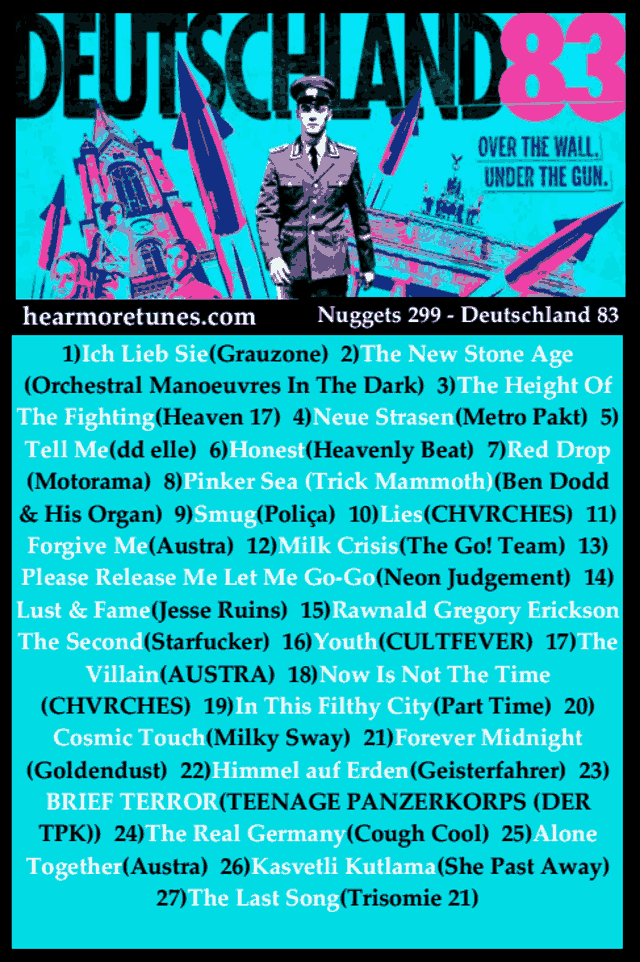 The series is set in 1983 when East German paranoia was at its height. Martin Rauch is a young guy sent to spy in West Germany to find out if the Americans are about to attack. The programme resonates because the sound track is rich with tunes of the early 80’s I heard  when I was studying in Dunedin. Martin and I share similar times except I was carefree and living the life as student whilst he, and millions of other Germans, lived in real fear of a nuclear war.

As with Justified, I imagined my own soundtrack to the TV series and here ’tis.

There follows a video of the title track followed by a Spotify playlist of the soundtrack to the series.

Back in the West we were oblivious to the struggles of the East German peoples, and instead hung out in clubs dancing like this…

More about this German New Wave / Post Punk Band from Hamburg here… and here’s another of their tunes.

Is it just me or does Glenn Gregory (the singer) look like Draco Malfroy in Harry Potter?

Heaven 17 - The Height Of The Fighting

Big fan of Austra. That voice! Even better with three singers but sadly twin sisters Sari and Romy Lightman aka Tasseomancy are no longer involved.

Like Grimes the band is Canadien; must be something in the snow…

Ben has an interesting take on NZ indie music.

Belgium post punkers. No videos on the web but here is a compilation.

Playlist: All Tracks - The Neon Judgement

Keyboard minimalist on the ever reliable Night People Records

No videos of this German post punk band but they do feature in this most excellent playlist.

This gem appears in the above playlist and the dance clip at the start of this entry. The band is from France / Belgium. It took me ages to run down this track after hearing it as part of a YouTube playlist.