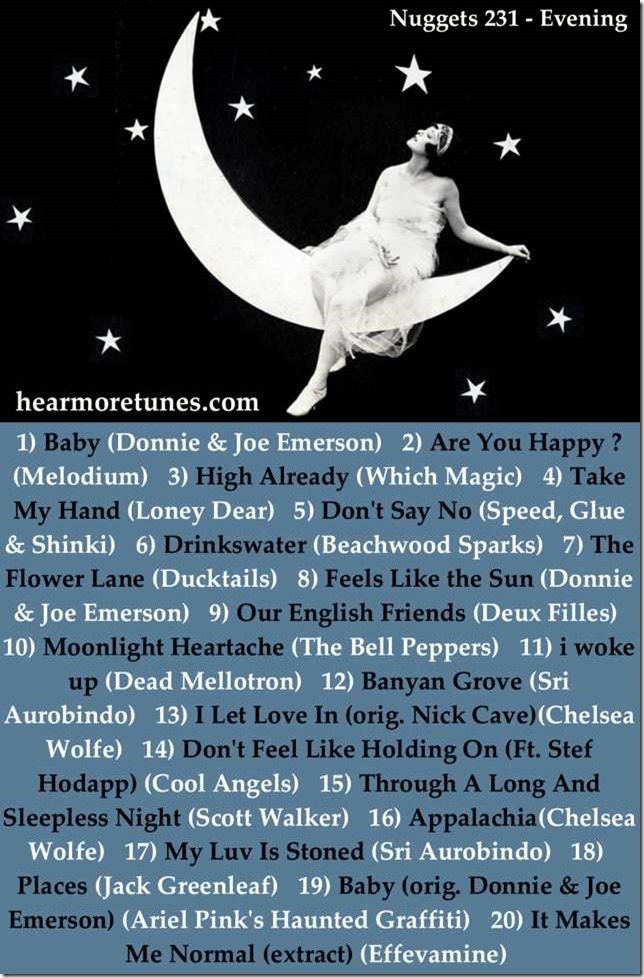 I have been listening to this mix in the evenings for the last few months. It hasn’t lost its allure.

Click the link that follows if you can’t see a playlist below.

[From the sirens sound]

The short, mysterious career of the aptly named female French duo Deux Filles is bookended by tragedy. Gemini Forque and Claudine Coule met as teenagers at a holiday pilgrimage to Lourdes, during which Coule’s mother died of an incurable lung disease and Forque’s mother was killed and her father paralyzed in a grisly auto accident.

The two teens bonded over their shared grief and worked through their bereavement with music. However, after recording two critically acclaimed albums and playing throughout Europe and North America, Forque and Coule disappeared without a trace in North Africa in 1984 during a trip to visit Algiers, where Forque had lived from birth to the age of five.

Theories from abduction and murder to a planned disappearance to spontaneous human combustion have been floated, but in the ensuing years, not a trace of the duo has turned up except for a mysterious letter purportedly written by Coule claiming that the pair journeyed to India on a spiritual quest, only to meet with further hardships.

Indeed, the short and terribly unhappy lives of Forque and Coule are at the root of the small but fervent cult following the mysterious duo have gained since their disappearance, not least because the placid, largely instrumental music on the duo’s albums betrays no hint of the sorrow that framed their personal lives.

This would be a terribly sad story if a word of it were true. In reality, Deux Filles were Simon Fisher Turner, former child star/teen idol and future soundtrack composer, and his mate Colin Lloyd Tucker. Turner and Tucker left an early incarnation of The The in 1981 to pursue another musical direction.

Turner claims that the idea of Deux Filles came to him in a dream, and he and Tucker strictly maintained the fiction throughout the duo’s career. Not only did they pose in drag for the album covers, the duo once even played live without the audience realizing that the tragic French girls on-stage were actually a pair of blokes from south London having a giggle.