I am on the road but that’s no excuse for not cooking up a mix. Here’s some thrashy stuff I have been listening to as I bike around Santa Monica….

I caught some of these bands at SXSW; Bass Drum of Death gave a great show. 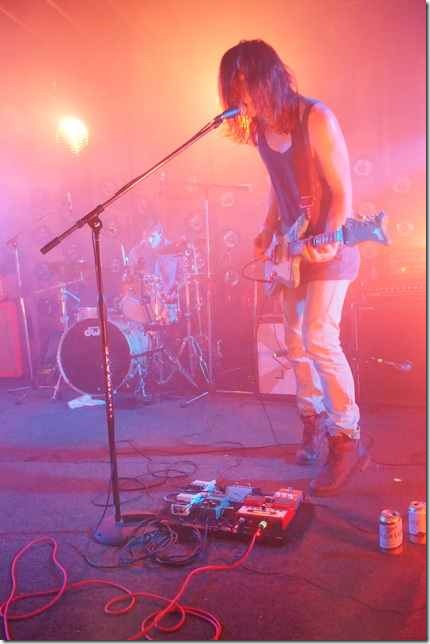 Wednesday, Austin. A late start so I missed out on going to the gig for the Townes Van Zandt rehab charity.

Instead I picked up a rental bike to make it easier to get between gigs. On Tuesday I found it a bit draining with the heat and humidity, especially the times I found myself walking the wrong way and having to backtrack.

I was offered a single speed cruiser or a new commuter style bike with gears, I took the gears (and a helmet and some flashing lights). Biking around was smooth and easy. The central area was all blocked off from traffic and apart from wondering fans there were no hazards. 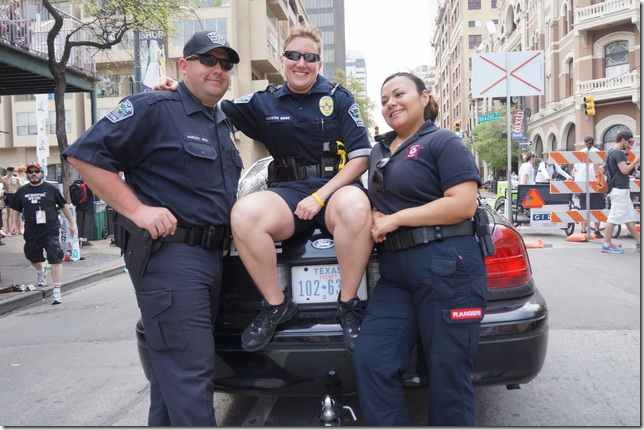 My earliest gig was at the Hype Machine venue in Trinity Street where the Twilight Sad did a stunning set. 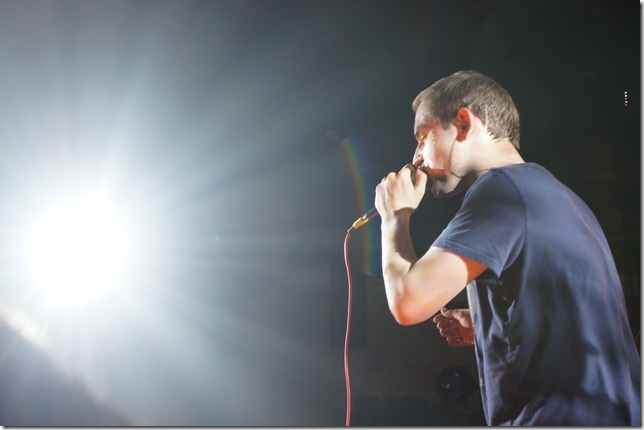 I crossed town to 6th and the Mohawk and caught the Twerps, the best alt country Clean band to come out of Australia. The big guitar sound went down well with the locals. Outside Chairlift was playing. I met up with a local reporter who is a big fan of the Wedding Present, so we walked down the street to the Red Eyed Fly. Like many of the bars on the 6th Street area its old and full of character. In the room where the Wedding Present performed the walls end about half a metre before the roof and the open space is interspersed with fans. This lets in the natural light. See below.

David Gedge was in good voice and they played Dalliance. I read that on Friday they had another show and were performing Sea Monsters in its entirety! 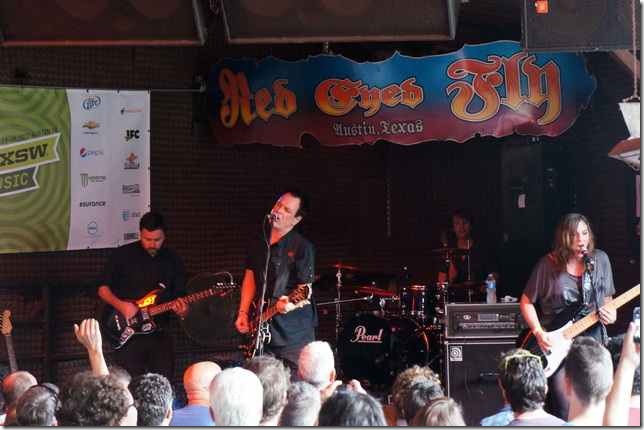 I looped back to the conference centre in search of another memory card for my camera and to catch up with Alabama Shakes who were showcasing in the big auditorium upstairs.

I spent some time trying to organise what to see in the evening. Here are some that appealed at 11; too many choices.

THE STAGE ON SIXTH PATIO

While I was mulling over this I biked to the Valhalla and saw the Fungi Girls. A young three piece. They were tight and fun. I tried to get into see Sharon Van Etten but the queue looked unmanageable, so I decided to chill out by going to church. Tristen, fresh from Nashville was playing in the Central Presbyterian church. Inside it was cool and calm. She is a slight woman but very came across as focussed and talented. She moves well with really expressive hands. A very tight band with some guests from Nashville to help out. Fab. 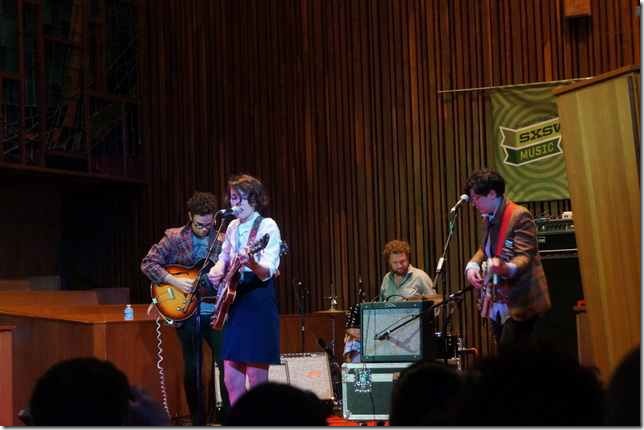 I resolved my evening gig dilemma by staying at the Sacred Bones showcase at the Elysium. This promised Amen Dunes, Zola Jesus, The Men and others in one spot. In addition, as a conference badge wearer I would be able to get in (and out) easily.

Started with Amen Dunes. They were very downbeat and underwhelming. I decided to flag them and to cross town for one of the other 11 gigs I had pencilled in, the Screaming Females.

SF were great, thrashy and tuneful. Marisa Paternoster is a great guitarist. 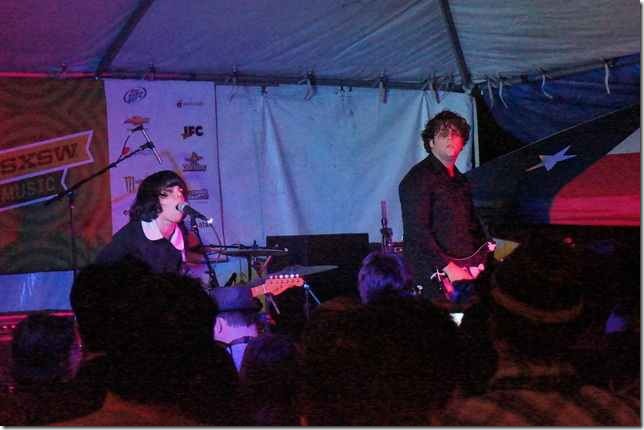 After that I went across the road to Lustre Pearl where Wavves were playing. They were really going off in a large room of enthusiastic devotees.

Back on my bike to the Sacred Bones showcase to catch the drone’y Psychic Ills . This is a band that I haven’t really got into before. But live their repetitive krautrock’y sound made sense. Groovy light show (see below). 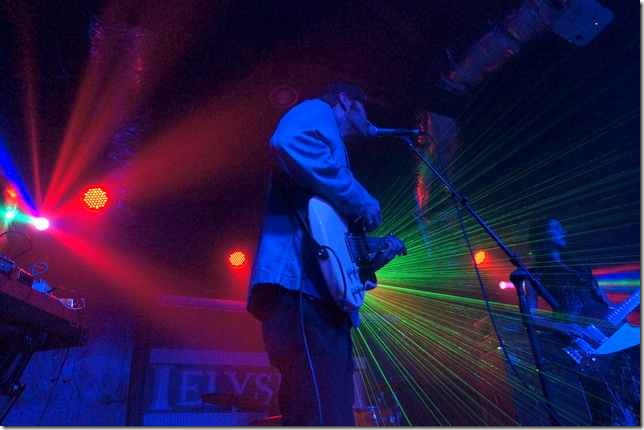 Last up was The Men. I had added some of their tunes to recent mixes but I didn’t know much about them. I spent time talking with people around who were from NY and they said that the band was gaining in popularity after lots of small gigs. They lined up with 3 guitars and a drummer. I noted the lack of effect pedals, they were obviously here to thrash guitars. They were thrashy and fast. Perhaps a bit lacking in variety and texture for my liking. As they ramped up people at the front started moshing and there was even one stage dive. I quickly appreciated why UK style moshing and stage diving weren’t well adopted to the USA. The proto punk is a malnourished pommy teenager. Here the well fed and beefy college students had a lot more mass behind them and hence the moshing led to people being knocked off their feet, especially the daintier females.. The stage dive was by an especially bulky guy, I don’t know if anyone caught him, but given his size there would have been a hell of a impact….

I biked around until 2 am to soak up some of the street craziness then I called for my limo to get me home.