bugger the verlaines, the clean and the bats, what are the Flying Nun bands of 2011 like? Who has Roger chosen to replace the ol’ guard? Has he chosen similar sounding bands to carry on the FN sound, or is he striking out with a new sound?

There was free cake (banana with and banana without choc icing and a lemony one), excellent Flying Nun beer and 5 bands (No die!, die!, die! unfortunately) 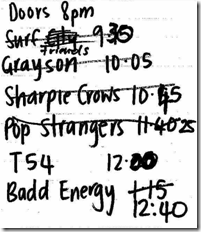 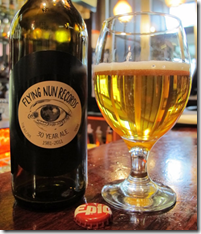 Surf Friends. Brad Coley and Pete Westmoreland look like surfers. Both play keyboards and guitar and dance like crazy. They make a thick new order’ish sound with bounce. They had a good support from the crowd who threw first their shoes, then their shirts up on the stage. Semi-naked guys boogying down made a colourful change from the usual black on black.

Has Roger got it right? Brad and Pete are tight and very dancey. That and the surfer airs makes them a long way off the normal flying nun schtick. But close your eyes, and the sound is thick and rhythmic, very the bats (listen to confusion below). Your on my mind (also below) is clean’ish; too clean’ish sez Pitchfart, but is that a bad thing?